On 5th March 2018, our (female) Head of Managed Services sent an email to her male colleague in the marketing team, as follows:

On 6th March, in response, she was told we were planning to launch a series of three blogs written by a woman, and possibly promote our white-collar boxing event with a picture of some of the female boxing contenders on Twitter.

makepositive is one of those non-corporate tech companies where no one has an office, the “boardroom” doubles up as the table tennis/karaoke room and where the CEO tends to notice if someone has steam coming out of their ears.  By the time IWD rolled round he and the HR team had done loads of analysis of the gender balance of the business, across all offices and at all levels, and he’d pledged to change things, to start us on the path to balance. You can read his blog here:  https://bit.ly/2trVwdn

In the immediate aftermath of that blog being published, the place was buzzing. People were talking about things like this being one of the reasons we work here, because our CEO “gets it”. Pretty soon after that, the CEO announced the addition of two women to the Leadership Team, and by the time IWD2019 rolls round our leadership team of 9 will contain 4 women, 2 of whom are amongst the longest serving employees and work in delivery, the largest part of the business.

For Ella, that blog sparked a new interest in equality and feminism in general, but in particular within this industry.  For someone who has always been a proponent of meritocracy, she’s been very careful when rewriting role profiles and job adverts to try to make them appeal to applicants of all genders without focusing solely on women. Whilst we still see far more male than female applicants, we’re confident we offer jobs to the best people we see, regardless of their gender.  In the last year, we’ve lost one of the ladies in the Ella’s part of the business, but 2 have joined; while we still work in a male dominated industry, in a male dominated company, with male dominated teams, we’re confident that we are doing all we can to marry gender balance with integrity.

Ella attended the WebSummit in Lisbon in November with one of our ex-colleagues: they received a pair of reduced-price tickets as part of the WebSummit’s efforts to drive balance at the conference. Having read about the WiT track with the quote “The WiT initiative and experience was life changing” they were disappointed not to get anything out of it, partially because they weren’t aware that they needed to have booked slots before the event if they wanted to work around the talks which they wanted to go to (Imogen Heap’s stands out), and partially because neither of them really understood what they were supposed to get out of it, how it was supposed to change their lives.

She also attended the Women In IT awards in London in January. Another ex-colleague had been nominated and shortlisted as a Future CIO and, although she had left us by the time the award dinner came round, the company sponsored a ticket for her and a guest. Ella was thrilled, honoured, touched (and many other words) to be invited, and had a great evening, whooping and hollering in support of some brilliant women.  She came in to the office the next day, hoarse, and stating that we needed a table at next year’s event.  Interestingly, one of the chaps response was: why do women in tech need their own, special awards?

We started reflecting on our own (admittedly inconsistent) efforts to establish an internal WiT group/community type affair. We came to the conclusion that the reason that it just can’t seem to get off the ground (other than makepositive’s effort), is that the demand just doesn’t seem to be there. This lead to the conclusion that women at makepositive are generally ok, that they are empowered to call out unacceptable behaviour. At the very least, there are a number of positive, strong kick *** women in the company who are invariably willing to take up arms in defence of our others if required. We’re not suggesting we always get it right, every time, but we’re certainly cognisant of the need for diversity and equality in MP towers. Of course, if you’re reading this and shaking you head thinking “Nope, you’re wrong” then please get in touch!

Whilst we believe makepositive’s women are treated equally for the most part (and perhaps that’s true for many women working at similarly forward-thinking tech companies), the stats suggest there is still much work to be done in our industry. We work in a field that’s in a constant state of flux and innovation, so it should shock and surprise us to see that gender balance has less momentum in this space than one might assume. The numbers don’t lie, and the fact remains that women in tech DO require our own awards to receive the recognition we deserve, tech summits need to offer reduced price tickets to drive gender diverse attendance, and the tech industry remains dominated by men.

CEOs like our own Mark Richards, and Saleforce’s Marc Benioff, have recognised the gender disparity within both their own companies and the industry at large, and have proactively moved to begin correcting the problem, but it won’t happen overnight, and it cannot be overstated that there is an absolute mountain of work to do in this arena. As of June 2018, women own only 5% of tech start-ups, hold only 25% of IT jobs, and of proprietary software jobs, only a meagre 28% are held by women. These numbers show that an industry that often prides itself on leading the charge when it comes to progressive policies is in fact doing a poor job of leading by example.

It would be easy to become disappointed when considering these numbers, but our own experiences here at makepositive leads me to believe there are pockets of the tech community that are stepping forward. It is also worth noting that this is a complex problem, which will need multiple solutions. While 82% of men currently believe companies spend too much time addressing diversity, one of the biggest steps towards creating balance in the tech sector will come by finding men who stand with women in driving this change.  From a business perspective diversity should be an easy selling point, with recent studies showing that companies with more diverse management teams generate as much as 19% higher revenue than their less diverse peers. These figures alone should make the case for the tech industry’s need to prioritise gender equality.

While the stats suggest there needs to be a shift across the whole industry to find and foster female talent, this can and almost certainly must begin on an individual level.  We can continue to move in the right direction, one man and one woman at a time, by giving a platform to opinions that fall outside of the industry main stream, striving to understand the paths that lead different people to specific careers, searching for the best candidates, and perhaps most importantly, prioritising the retention and upward mobility of women.

On this year’s International Women’s Day, we are proud to be women in a tech company that is working to lead by example and, in keeping with the IWD theme for 2019, striving to #balanceforbetter

Our Manchester office have also been showing their support for International Women’s Day! 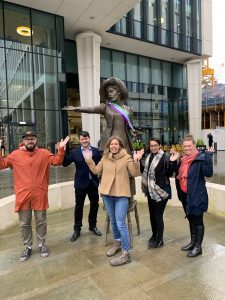